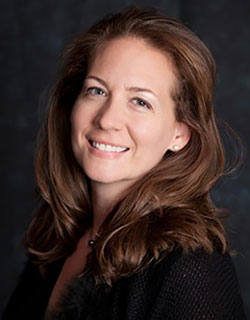 Exercise creates an environment within the brain that is very conducive to positive change. For example, an exercised brain has more blood vessels and higher levels of important chemicals called neurotrophins. Neurotrophins nurture and sustain the billions of neurons on the brain (in fact, they’ve been called brain “fertilizer”). By increasing the availability of neurotrophins, exercise makes the brain a place where neurons can flourish. And when neurons flourish, cognition, memory and mood are optimized.

Excitingly, an exercised brain also has more cells. When it comes to brain cells, neurons get most of the attention. They are, after all, the basis for cognition and memory and mood and emotion and all of the other wonderful things that the brain can do. But neurons have a huge support team, which is comprised of blood vessels and glia. Glia are important brain cells that have long been known as the “glue” that holds the brain together. Together, glia and vessels provide structural, chemical and nutritive support to neurons. 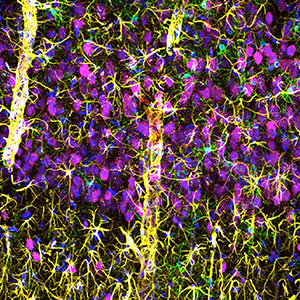 The picture above is a multi-channel confocal image, in which 3 different cell types are visible. Neurons are in purple. The long fibrils of astrocytes, a type of glial cell, can be seen in yellow, surrounding blood vessels and probing the microenvironment. Microglia, another type of glial cell, are in green. Their long arbors can also be seen between the neurons. This picture illustrates the tight connections between neurons, glia and blood vessels.

Because it increases blood vessels and neurotrophins, exercise is a great way to protect the brain from injury and disease, as well as a way to help it recover. My laboratory is currently investigating the capacity of exercise to help the brain heal itself. We have 2 main projects. The first involves binge alcohol exposure, which damages highly plastic brain regions, such as the cortex and hippocampus. The other project involves irradiation of the developing brain, which happens when children are treated for brain tumors. Using rodent models of these 2 types of injuries, we are investigating cellular and vascular changes due to exercise, and how these changes could counteract damage and ultimately improve function.

© University of Houston. All rights reserved.