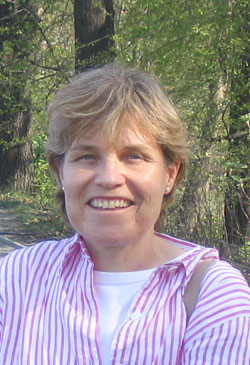 I am interested in how complex behaviors (such as mating behavior and circadian behaviors) are regulated by genes and molecular pathways. We are using the fruit fly, Drosophila melanogaster, to approach these questions, and we make use of the many powerful genetic, molecular and behavioral tools that are available for this model organism.

Male courtship in fruit flies consists of well-defined steps including orienting toward the female, tapping, licking, singing a courtship song and finally mating. The behavior can easily be observed and quantified in the lab. We pair a female and a male in a small plexi-glass chamber and watch them for 10 minutes. The courtship index is then calculated as the fraction of time the male spends performing any of the courtship steps during the observation period (Movie 1). This assay allows us to study the effect of mutations and to identify the genes and molecular pathways that regulate mating behavior.

It has been known for quite some time that specific regions in the brain of a male are important for successful courtship and that the cells in these regions are characterized by the presence of the male specific Fruitless (fru) protein. However, we have recently discovered that the fat body, a non-neuronal tissue that surrounds the brain, is essential for normal courtship (Figure 1, fat body cells are stained blue). The fat body, which is often compared to the mammalian liver, consists of large, secretory cells (Figure 2, the nuclei of fat body cells are marked with a fluorescent dye).

We and others have shown that it produces male-specific proteins. In fact, when we used genetic means to specifically make body cells female in an otherwise normal male, we observed drastically reduced courtship (Figure 3). This demonstrates that the male specific products of the fat body are essential for courtship.

But how do these factors talk to and influence the brain so that efficient courtship can occur? The fat body is well known for secreting proteins into the hemolymph, the circulating fluid (“blood”) of flies. Our current hypothesis is that the fat body secretes male specific factors into the hemolymph and that they interact with the brains in as yet unknown ways. In support of this hypothesis we have shown that at least one such male specific fat body factor, a protein called “Takeout”, is present in the hemolymph. Efficient courtship may therefore require the interaction of endocrine factors with specific parts of the nervous system.

However, interaction of hemolymph factors and the nervous system is not so straightforward, because flies have a blood brain barrier like mammals do. It is not known how secreted factors pass through or signal through this barrier to influence the nervous system and ultimately behavior (Figure 4). 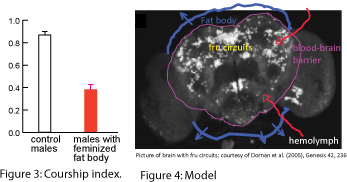 The current projects in the lab examine the role of the fat body and other non-neuronal tissues in the regulation of courtship behavior. We have identified several male specific factors that affect courtship, but are expressed in non-neuronal tissues. We use molecular, genetic and behavioral assays to study these genes and to examine how they affect courtship. We are also exploring the mechanisms of their interaction with the brain. The goal of these and other projects in the lab is to get closer to an understanding of how complex behaviors are regulated.

© University of Houston. All rights reserved.